A further eight male Moxons’ DNA was tested and compared with the first six who were tested in 2002.

This first DNA report discusses the results of tests and analysis of six male Moxons, one from each of the major Moxon lines

It shows we have two groups of Moxons, who share a Common Paternal Ancestor, perhaps over 1000 years ago:

Click on these images below to see a full cover of the book.

Thomas Moxon, the tailor and town counciller was born in 1804. His story entitled The Tory Tailor, by Christopher Moxon is written up in Issue 50 of the Moxon Magazine.
Are you related to Thomas? Let us know. Which of the 50 Moxon Trees does he belong to?
Find out more by joining the Society.

Sue and John C. Moxon – the latter generally known as “John deWight” did a grand job of organising the 2012 gathering on the Isle of Wight in September.  Over thirty members enjoyed a good weekend together.  Find out more in Issue 50 of the Moxon Magazine.

The Moxon Society’s 23rd annual gathering was held in Wakefield in September 2011. It was organised by John Earnshaw the Society’s treasurer.

More information about the Wakefield gathering can be found in Issue 48 of the Moxon Magazine.

Initiated by Jimmy Moxon, the Society’s founder, Moxon family members gathered in Leeds for the first of many annual gatherings. John C. Moxon, now of the Isle of Wight remembers it well, including the coach – none other than a 27 seater Moxon Stratocruiser. To read more, check out issue 50 of The Moxon Magazine, downloaded from the Members Only section. 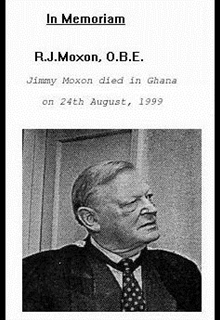 In 1987, Roland James (Jimmy) Moxon of Asford Carbonel, Ludlow was looking for avenues to sell his book “The Moxons of Yorkshire”. He sent flyers to every Moxon in the UK telephone directory, offering his book for sale. There was significant interest, so the following year he published a Magazine, followed by the first Annual Gathering at Leeds.

FROM EARLY days, the Moxon family has produced more than its quota of gifted rebels and Jimmy Moxon, the only white traditional ruler and member of the House of Chiefs of the Gold Coast and later Ghana, was certainly one. In addition to his chieftaincy he was also at various times a colonial officer, Ghana civil servant, author, entrepreneur, bookseller and publisher, restauranteur and local and family historian.

Hailing from Yorkshire, the Moxons first became prominent as leading printers and publishers in 16th-century London but are best remembered for Joseph Moxon (1627-1691), Mathematician, Astronomer and Hydrographer to Charles II. Exceptionally, for someone with a trade background, he was elected FRS, only to be the first fellow ejected for non-payment of his dues.

Roland James Moxon was born in 1920 in Shrewsbury and attended Denstone School, Macclesfield, where his father was headmaster. Both his parents were classical scholars but he would recall that he quite failed to relate to discussions of the Peloponnesian wars even in the balmy and orderly gardens of Ludlow where the family had a lovely cottage. After further but passing acquaintance with academia at St John’s College, Cambridge, where he read History, in 1942 he boldly embarked for Africa where he was to become a District Commissioner in the then Gold Coast Colony. Thereafter he was fulfilled.

Jimmy Moxon was a great raconteur, combining diplomatic sensitivity and courtesy with acute and penetrating observation and he was soon very popular not only in colonial service circles and amongst the sophisticated élite that was preparing itself to rule the future Ghana, but among the townsfolk and villagers with whom he also came in frequent contact. He served in Kpandu, Dodowa, Aburi and the capital, Accra, and it was a sad irony that he held administrative authority in Greater Accra at the time of serious anti-colonial rioting before independence.

He played a major role in setting up the Ghana Information Service and especially its film unit, and his ever-widening circle of friends came to include both Kwame Nkrumah, the first president of Ghana, and the American capitalist Edgar F. Kaiser, who made such a contribution towards the economic development of the former Gold Coast. Moxon’s friendly diplomacy contributed significantly to the successful completion of the Akosombo dam and associated aluminium smelting complex at the new Ghanaian port of Tema. All these he extolled in his book Volta, Man’s Greatest Lake, published in 1969 by his friend André Deutsch.

Many an amicable ambassador or itinerant philanthropist has been presented with traditional sandals, bedecked in colourful Kente cloth and borne aloft in a palanquin as an honorary village ‘chief’, but the case of Roland James Moxon was unique. Styled Nana Kofi Obonyaa on the eve of independence, he was actually chosen by the people over whom he had had charge as a District Commissioner and gazetted as Ankobea of Aburi – the beautiful spot atop the mountain escarpment north of Accra selected as the site of the Gold Coast’s early botanical gardens – and he took his seat in the House of Chiefs.

In 1956, Kwame Nkrumah, then prime minister, had insisted that Moxon stay on after independence (shortly after which he was appointed OBE), and he became a valued adviser and confidant. Apart from visits to Britain, largely for medical reasons and to see family, he resided in Ghana for the rest of his life. Over the years he featured in Figaro as ‘Gentleman Jimmy, Chef Tribal en Afrique’ and in numerous other articles and BBC documentaries. At the time of his death (from cancer in a Ghanaian hospital), he was engaged in completing his autobiography, centred on his chieftaincy, for a French publisher. His horizons were wide. When the issue of the slave trade first came to be re-examined in the mid-Sixties, he appeared in television documentaries in the United Kingdom as an informed local historian and moreover gave a convincing acting performance in the role of the governor of one of the trading castles of yore. Come the 350-year anniversary celebration at Springfield, Massachusetts, Jimmy was to be found representing the Moxon family, since one of the ministers elected there in 1662 had been a certain George Moxon, MA of Sidney Sussex College, Cambridge – a Congregational divine who, true to family form, had ‘travelled’ subsequent to serious disagreement with Oliver Cromwell over the nature of Puritanism.

Moxon had a flair for business ventures. Mainly with the growing tourist market in mind, he collected and published a series of Ghanaian recipes and established two fine eating houses to popularise African cuisine – the famous Black Pot restaurants in Accra. To encourage and cater for the new élite, he set up a publishing company in Accra and, after a trade fair in the mid-Sixties, he bought a discarded prefab and relocated it outside a leading hotel, transformed into a neat little bookshop. As well as being a stalwart of the United Oxford and Cambridge University Club in Pall Mall, he was also chair and life and soul of the Oxford and Cambridge Society of Ghana. As a chief he sported traditional wives, and he adopted sons, but otherwise he never married. Even so, his houses were always full both of young Ghanaian protégés and colourful foreign visitors passing through Africa with introductions to the ‘great white chief’. He loved Ghana and, possessing a scholarly, innovative mind, he was ever initiating new projects. It did not much matter that, apart from his writing, he was easily distracted and seldom demonstrated the patience to see them through, since he was invariably eager to pass on new and potentially profitable business ideas and ventures to his many Ghanaian friends.

Jimmy Moxon was voluminous in all things, girth, voice, local lore, bonhomie and charity. Because of the imminence of traditional festivals his death is yet to be formally announced in Ghana. Funerals are important celebrations there. Soon, when the spirit of Nana Kofi Obonyaa, Ankobea of Aburi, formally joins his ancestors, that there will be libation, pomp and circumstance aplenty is assured.